Decor : A passive building for the new Estella Environmental Nursery

The new Estella Environmental Nursery has been designed to have a low environmental impact. To do this, they have focused on reducing impacts on the use of materials, reducing energy demands and recovering the natural environment.

The community of Navarra is currently the Spanish region with the largest number of Passivhaus certified projects, although the largest certified area is in the Basque Country. With the Estella Environmental Nursery project, a project that seeks to serve as a basis for other futures. 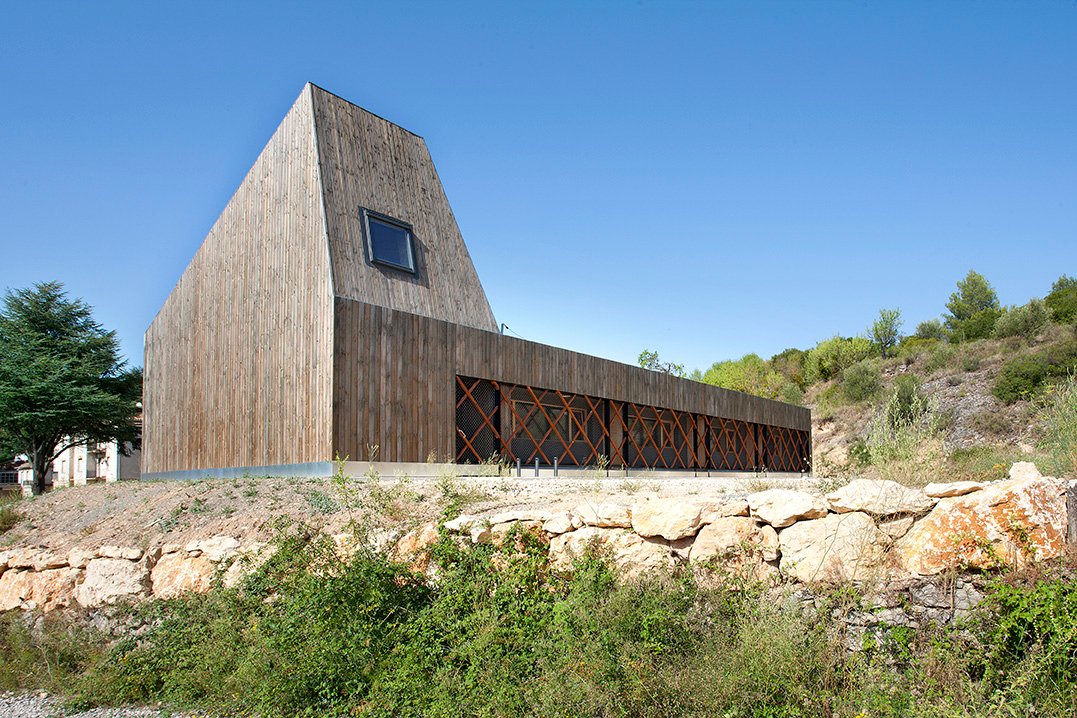 A design with a high degree of formal abstraction is chosen, so that the building has a sculptural and objectual character in the environment. A visually compact and energy efficient building is intended.

A clear and functional distribution is proposed, which concentrates the service, rest and changing rooms in the north area, and the work and office areas in the south part. These spaces are separated by a glazed corridor to the offices.

The office and meeting room spaces are conceived as a functional strip that can be distributed on demand in the future and that look out through an intermediate maintenance space created by a large wooden lattice.

The new building should serve as a conceptual basis for other similar ones in the future: an iconic, compact and energy efficient building, made with natural materials and using the best available technology, in favor of sustainability. The use of a highly industrialized wooden envelope provides the idea that respect for the environment does not necessarily conflict with technology.

Among the existing structural options, the use of CLT panels has several advantages: the possibility of generating the necessary parts in the factory for their subsequent transfer and rapid assembly on site. This system facilitates a great formal freedom that allows reaching the objective that the study was pursuing: that the building had an almost orographic quality. In addition, wood is a natural, renewable material that works as a “reservoir” for CO2.

It was intended that the building, of about 280 square meters, was seen as a “natural element”, and since it was going to be seen both from the different fronts and from an elevated position, it was necessary to find a cladding system that would allow both its use on facades as on roofs. The solution was a continuous cladding that made it possible to solve the building’s impermeability on a second level: a wooden cladding with a ventilated system in the case of the roof. The wood used is thermo treated Douglas pine, colored by impregnation process.

A building to be solved on a single floor carries a bad coefficient, so that it increases losses in winter. These losses can be offset by solar gains and internal loads. For the first, the holes in the building are oriented to the south. However, that same bad shape coefficient increases earnings in summer, which should be minimized. For the latter, an overhang was used to protect the large window to the south of the work area. The forward reduces gains in summer and allows them in winter, but the forward alone was shown to be an insufficient element. To solve this, it was decided to add a wooden lattice that, in addition, becomes a security element of the building.

In accordance with the tasks carried out inside the Nursery, a construction system that was respectful with the environment and with almost zero energy consumption was proposed; The project has obtained Passive House certification from the Passive House Institute (PHI). The structural system facilitated the continuity of the insulation on the outside of the building, placing an insulation under the foundation slab, and giving it continuity on the outside of the CLT structural shell. This reduced the presence of thermal bridges and their magnitude.

The CLT had a sensory comfort component that came from leaving it seen inside. This commitment made it necessary to seal the exterior of the panels and, to avoid interstitial condensation, it was decided to place a sheet with double Sd on the outer face of the board to minimize the exit of water vapor to the outside, but allow the flow of it to the interior.

To ensure a continuous amount of fresh, filtered air and a comfortable indoor temperature in a D2 climate zone like Estella, two heat recovery ventilation units were installed: Zehnder ComfoAir Q600 and Zehnder ComfoAir Q450. The first has an air volume of up to 600 m3 / h at 200 Pa and the second of 450 m3 / h. These units, which have a very low energy consumption, achieve a heat recovery of up to 96%, guaranteeing quality air, free of dust and adequate humidity. An online modulating By-pass system allows continuous information on the indoor and outdoor climate to be obtained through humidity sensors. In this way, it is possible to adapt the indoor climate based on the average of the readings obtained during the previous days.

In addition, thanks to the modular preheating system, it is possible to control the air inlet temperature and thus optimize its supply, reducing pressure losses and electricity consumption.