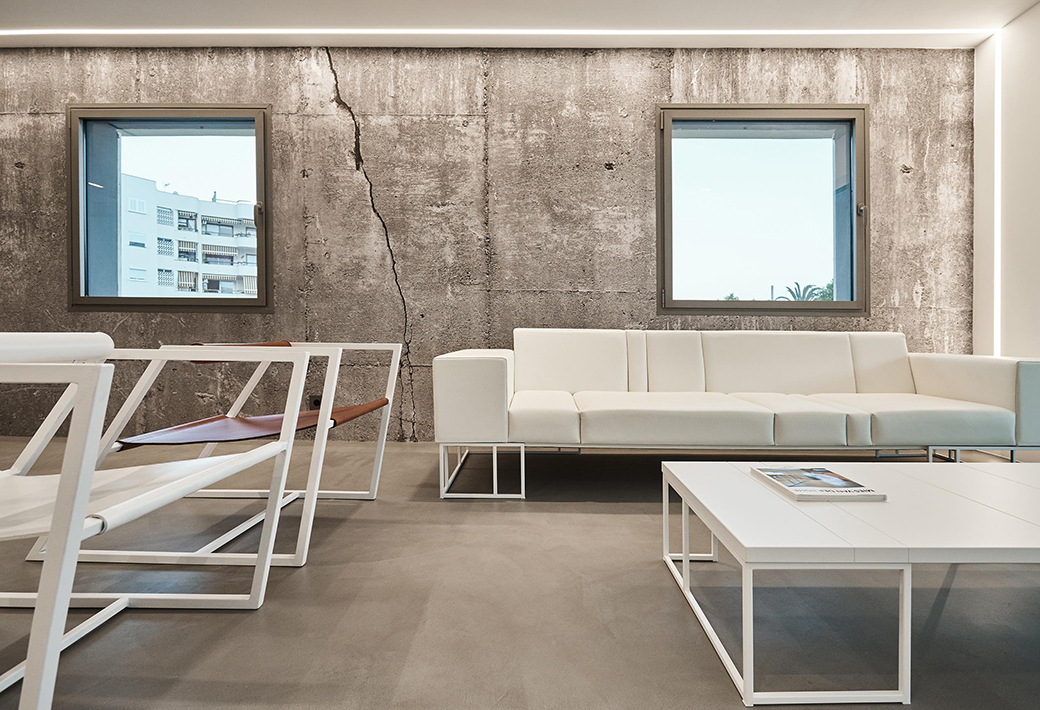 Minimal Studio just finished the project of integral reform of a house of 200m2 located in Puerto de Alcúdia (Balearic Islands) where they can appreciate its methodology and aesthetic trend in each and every one of the corners of the house. 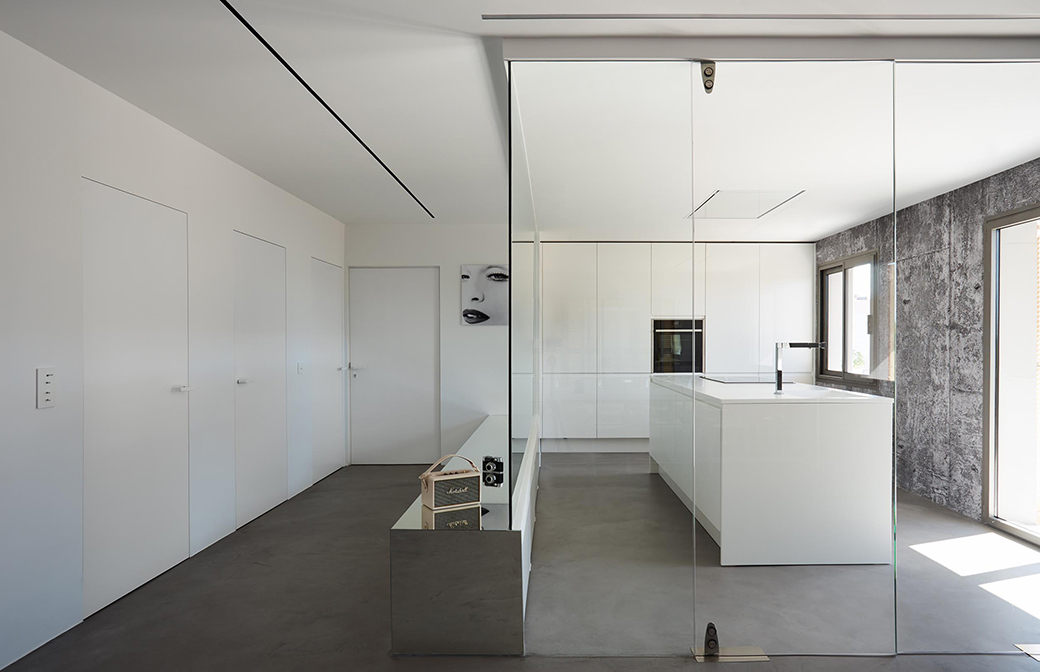 When beginning the reform of the property, the current state was characterized by a classic style, in which the interior partitions predominated, which together with a dark chromatic, gave the space a low luminosity. 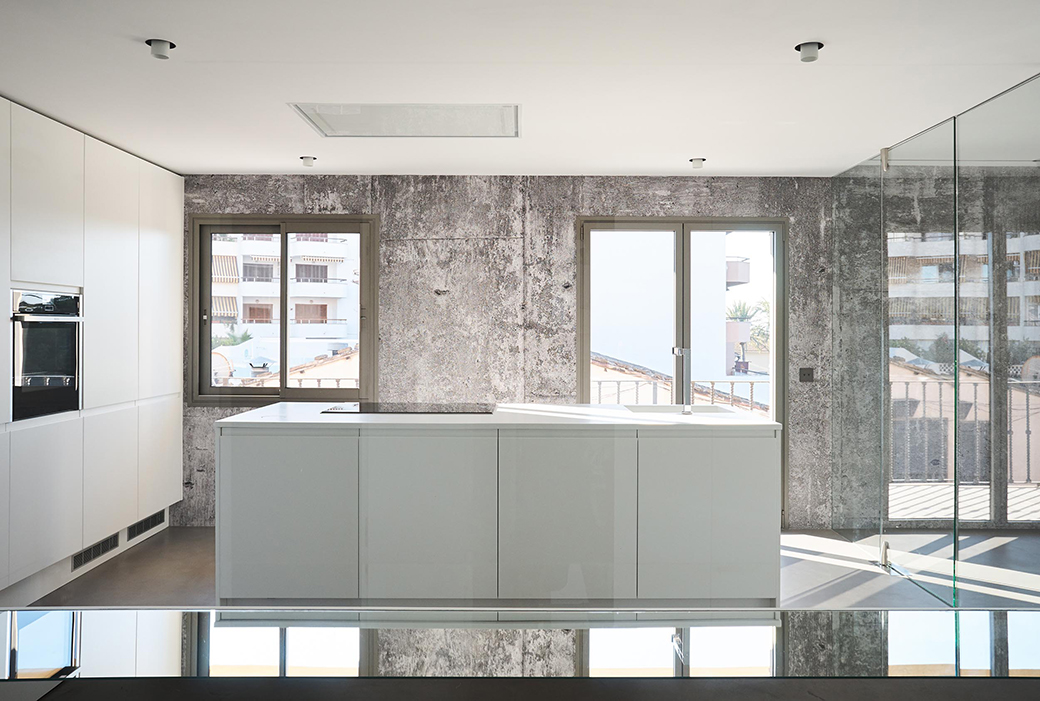 The main objective of the reform was to provide the house with greater amplitude and luminosity in all its surface, reason why proceeded to the demolition of great part of the internal partitioning as well as of all the existing coatings, toilets and furniture. 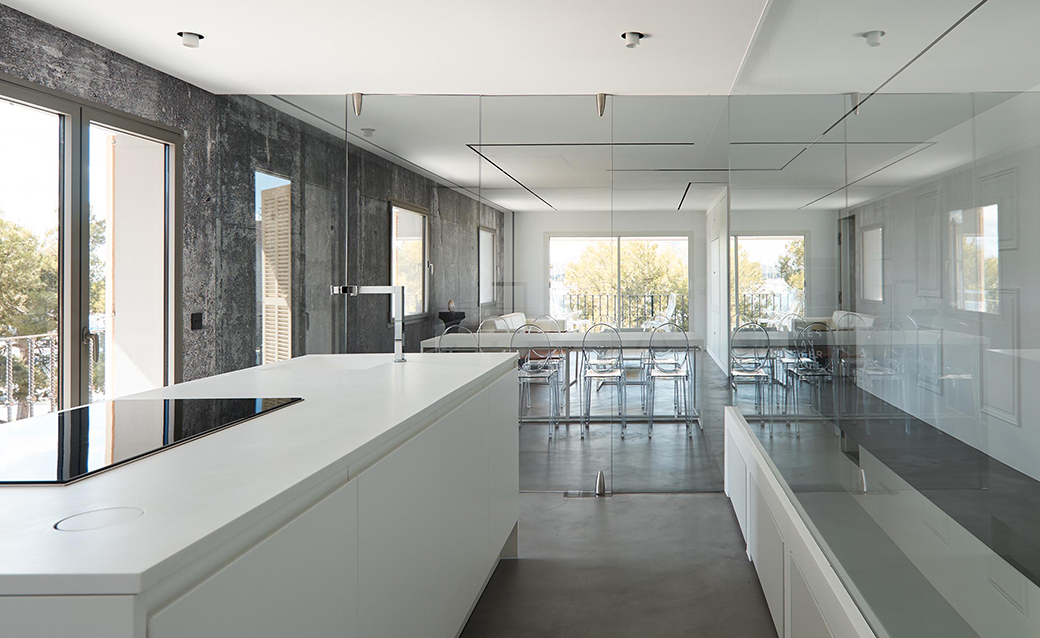 When accessing the house, a clearly minimalist aura, the supremacy of the white combined with the grayish tones of the concrete create a perfect chromatic balance, highlighted by the constant entry of natural light through the large perimeter windows, which give us access to the exterior terrace. 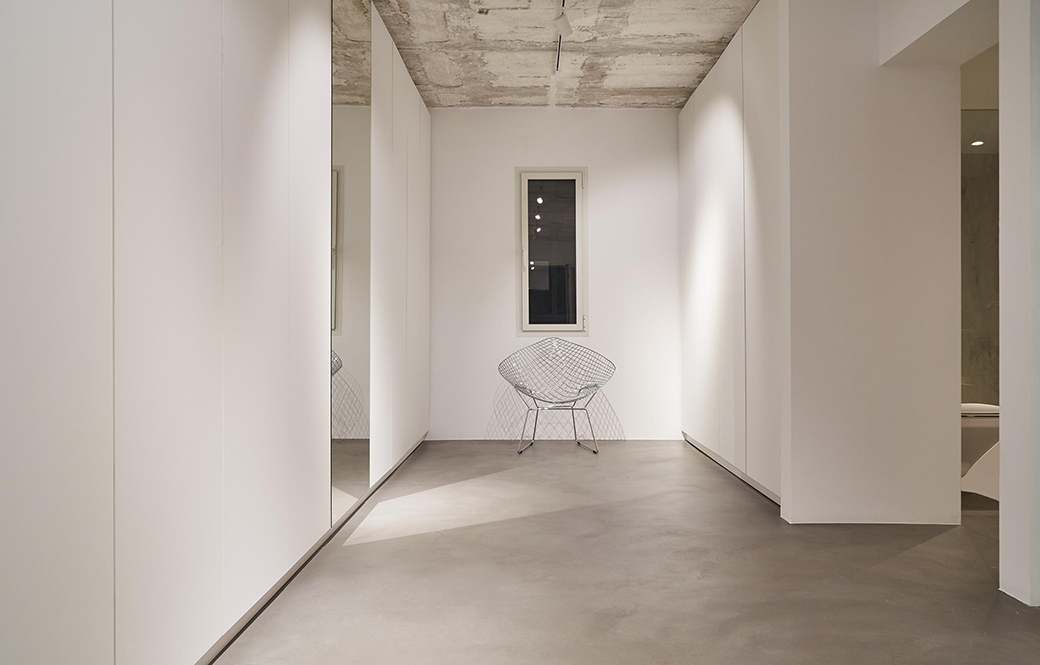 A determining factor in the distribution was the proposed change of stay of the kitchen, integrating it in the living room, forming the heart of the property. To isolate it from the rest of the house, a perimetral enclosure of laminated glass has been designed, with pivoting closures, which perfectly fulfills the function of isolation without depriving us of an apex of the spectacular panoramic view of the sea. 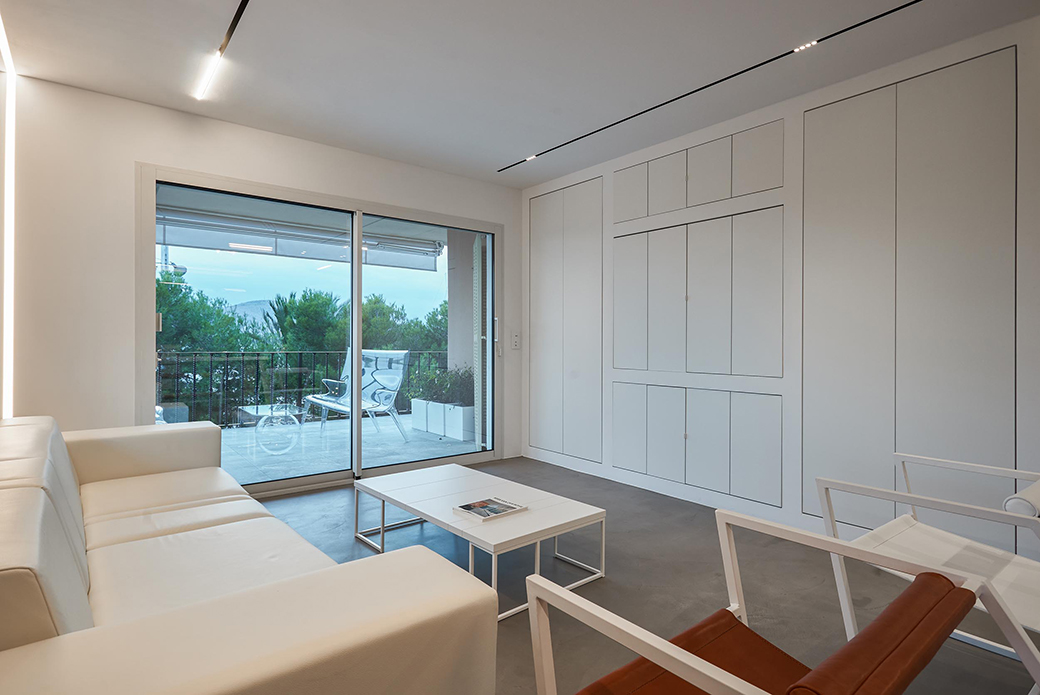 It shows a great feeling of spaciousness, caused by the diaphanous space, and the obsession to design a house with great storage capacity, leaving nothing in sight. All the tools of the house remain hidden, through carpentry specially designed to go flush with the wall. 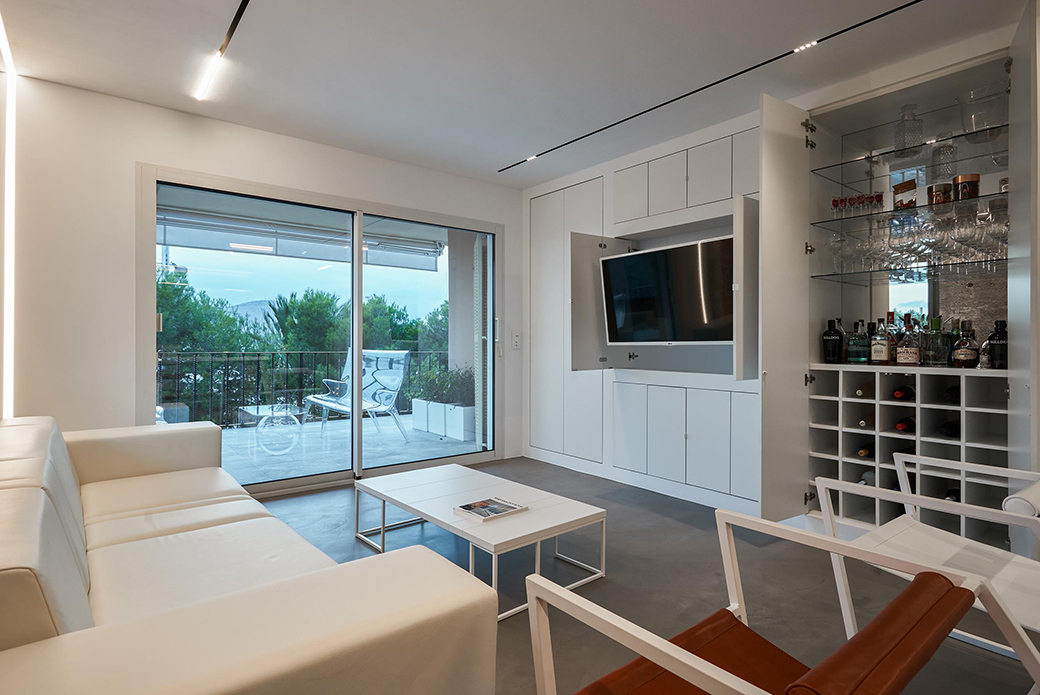 In the night area, two existing rooms were grouped to form the large master bedroom, composed of dressing room and bathroom en suite, which stands out for its retro-lit headboard and uncoated ceiling. 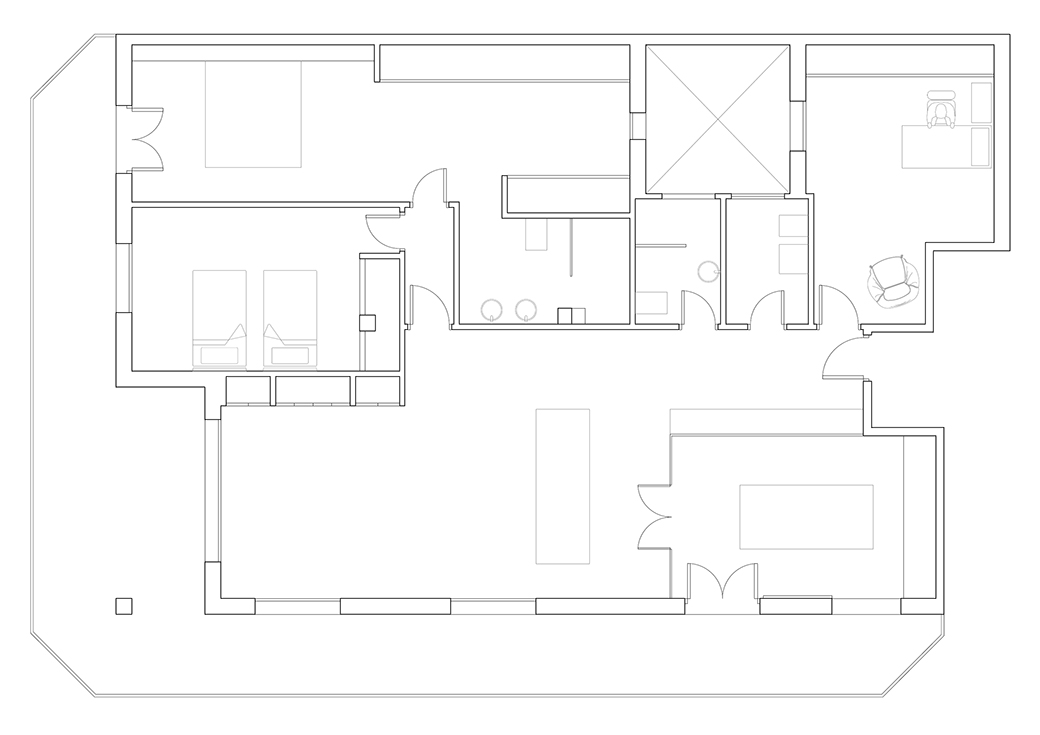 The neatness of the white and the refined marble contrasts with the brutalism of the bare roof, forming a unique atmosphere. Each element, each coating, each mechanism, has been chosen with great care, in order to obtain a perfect chromatic balance. 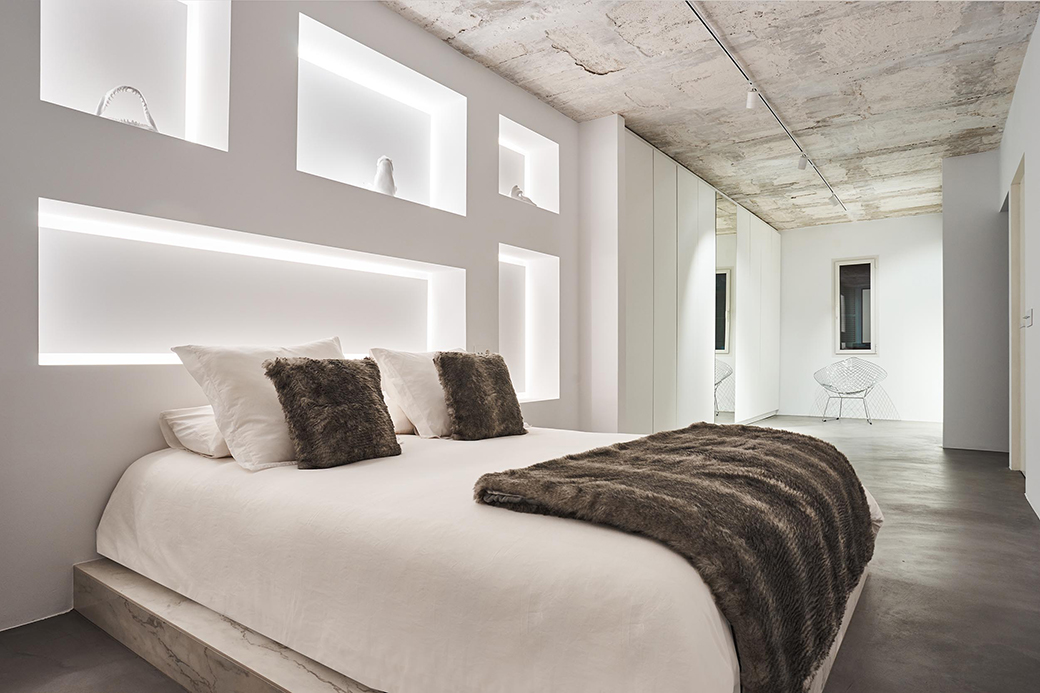 It has been chosen furniture with translucent materials to provide greater visual lightness to the whole and enjoy a complete view from any point of the house to the outside. 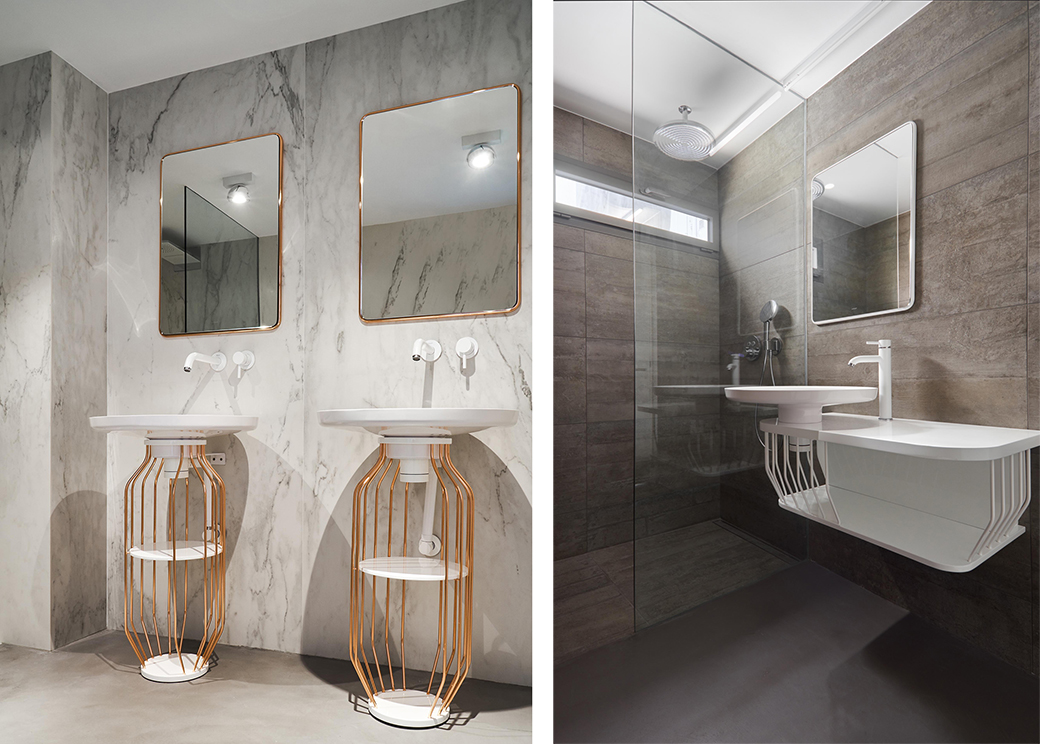 All the interior carpentry of the house has been designed in white, with frame and hidden hinge, giving a sense of continuity with the rest of the walls of the house. The external woodwork it has been replaced in its entirety by aluminum carpentry with thermal bridge breakage and solar control, combining white and gray tones. 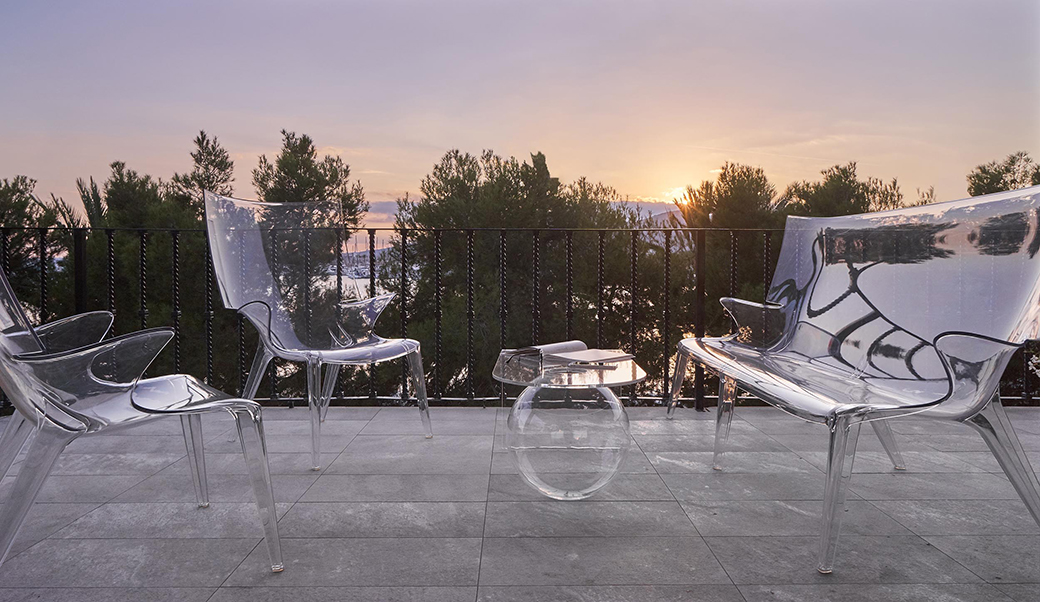 Special attention has been given to the illumination combining elements totally embedded and elements on the surface, with great light versatility and ability to create different environments in a simple way. The mechanisms They have been chosen in white Corian and chrome for the walls covered in white and polished graphite finish for the grayish walls.